Drive 5 kilometers in a north-west direction from the center of Bosa, and you’ll find the beach named S’Abba Druche (La Spiaggia S’Abba Druche di Bosa, also known as S’Abba Drukke). This beach has a length of nearly 200 meters and faces west, overlooking the clear and transparent sea.

It’s a nice secluded spot, and suitable for children to paddle or swim. The water is so transparent that you can see the fish swimming around, and there are some big rocks waiting to be explored. Near the beach, there is a small forest with a restaurant. You can park your car or camper in the shade, and there is free WiFi, a bar, pizzeria, and a few showers with toilets.

Near S’Abba Druche, there are 3 beaches to choose from! It’s a delightful beach for an afternoon swim or snorkel in crystal clear water, perhaps followed by a refreshing drink. It’s a suitable place for familes to spend the day. S’Abba Druche can get crowded in the month of July and August.

From the center of Bosa, S'Abba Druche beach can be reached by heading north on via Strada Provinciale 49 in the direction of Alghero. It's a short drive that shouldn't take you more than 10 minutes. 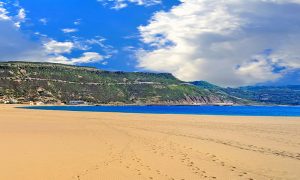 The beach of Bosa Marina (Spiaggia di Bosa Marina) is located in front of the village of Bosa, in the province of Oristano, west Sardinia. It’s quite a wide beach (up to 130 meters!) with a total length of nearly ...
Read More 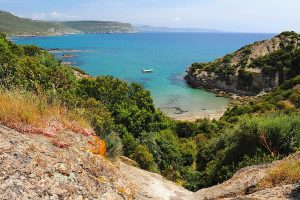 From Bosa, head north-west in the direction of Alghero for about 10 kilometers, and you’ll discover a pretty cove named Cala Managu (Spiaggia di Cala Managu). It’s a secluded rocky cove with a length of about 180 meters ...
Read More